It’s hard to know what to expect when travelling to North Korea. Could Kim Jong-un fire a nuclear missile? Could the US decide to invade and topple the regime? All potential scenarios worth considering. I wasn’t expecting, however, that one of the locals would be a big Westlife fan.

I’ve always been intrigued by North Korea, or the Democratic People’s Republic of Korea (DPRK) to give it its official title, primarily because of the way it has isolated itself from the rest of the world and nobody really knows what’s going on inside its borders.

While some would say they’re morally unsure if they could travel there due to the way the country has been and continues to be run, it’s also something that I had to question. Like my fellow travellers there, I felt by visiting there and meeting some of the locals, it could help break down some barriers and let them get a glimpse of a world they’ve only been told about or watched on TV (and vice versa) and ultimately see that as people we’re not that different at all.

I will, in the not too distant future, outline how we organised our trip to North Korea and how much it cost but it was, suffice to say, very simple and actually quite cheap.

The surreal tone of the trip was set early on. When we arrived at Beijing Airport for our Pyongyang bound flight, we learned our Air Koryo plane had already departed.

Side note: Air Koryo is frequently described as being the “world’s worst airline,” due to its one star ranking.

We hadn’t missed the flight but instead a number of North Korean diplomats had taken our seats as they needed to get back to Pyongyang in time for the Liberation Day celebrations, which we too would be taking part in but they were obviously deemed more important.

After a two hour delay, and a slight questioning of whether we’d actually just been duped into thinking we were going to North Korea, our plane pulled up and, shortly after, we boarded.

I’ve only ever flown business class once and it turned out to be during this flight, and it was entirely accidental.

After Kathy (fiancée) and I boarded the plane, we realised that our seats didn’t actually exist. Although we were meant to sit in row five, there was no such thing. And you thought Ryanair was bad.

Clearly not the plan, our North Korean air hostesses glanced at each other confused before one of them told us we could sit in business class.

With the seats more spacious than those of our brethren in economy,  I was excited to see what other advantages our accidental upgrade would bring. Not many, was the answer.

The in-flight meal, if you can call it that, was the same for all 200 or so on board the flight and consisted of a piece of “chicken” between two buns. No garnish, no lettuce, no cheese, no tomatoes. Just a piece of chicken served on mildly warmed bread. We did get a small plastic glass of beer to wash the dryness down though. 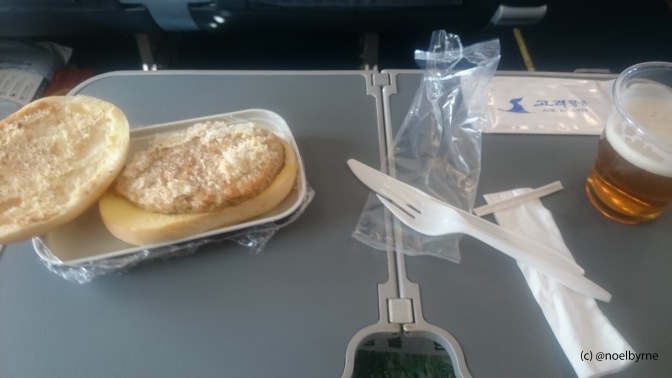 Having eaten the “chicken,” I did have one brief moment of panic when I spotted two men dressed as pilots emerge from the cockpit only meters in front of us. Who was flying the plane?

It turns out, there are usually 3 or 4 pilots on board any given Air Koryo flight and they had just been in there for a chat. Or at least that’s what we were told. They too joined us in business class.

To keep us entertained throughout the 60 minute flight, a North Korean concert played on the screens while we also had the benefit of reading the local paper, The Pyongyang Times, which included two articles in particular that caught my attention:

Once we touched down in Pyongyang International Airport, we were guided to security and customs in the newly opened second terminal.

It was a little after 10pm local time and we were the only flight arriving and the only people in the airport, other than the staff.

A quick glance at our visas, which aren’t in your passport but a separate piece of paper, and we were then led to customs, where the real fun begins.

Each of us had our passports and phones taken from us and each phone model and passport number were matched in a book by one of the officers, one of whom we saw scrolling through one of the phones while he was waiting.

I had remembered to delete my copy of Barbara Demick’s ‘Nothing to Envy: Ordinary Lives in North Korea‘ (fascinating read) from my e-reader before arriving so I knew I was in the clear, although one of the guys did have another such ‘anti-regime’ book on his but they didn’t notice it.

It was certainly one of the more thorough customs checks, with all laptops brought away and checked for any files that would be deemed illegal, but thankfully nobody was found to be carrying anything suspicious.

The customs weren’t as thorough when leaving the country, surprisingly, as we had heard all photos were checked by security before leaving and they can delete some of them if they so wish.

Neither of our phones or cameras were checked, although the security guard did scan my hand with one of those metal detector wands. What she was looking for I’m still not sure.

After our group of 22 made it through customs, we met our North Korean tour guides who would be bringing us for around the next five days. Their names were Mr Kong, Mr Lee and Ms Pong.

Here’s the latter singing a traditional North Korean song on the bus one of the days. As you do.

Rather surprisingly, when Kathy and I introduced ourselves to our guides and told them we were from Ireland, Mr Lee immediately responded “Ah, Westlife.” Not the response we were expecting.

Not only did he know the band’s name but he was very much interested to know how each of them was getting on, naming each of them, particularly interested in hearing if Shane Filan’s solo career had taken off.

He also wondered if we knew if they’d be getting back together. I said maybe at some stage in the future. He seemed happy with that. Whether Pyongyang will form part of any such reunion tour, we’ll have to wait and see.

A day or so later, on the bus journey back from the DMZ (Korean Demilitarised Zone) and Kathy and I, along with one of our Aussie travellers, Nick, tried singing a few Westlife songs for Mr Lee.

With none of us being actual Westlife fans though, they usually came to an abrupt stop after a couple of lines, but Mr Lee was there to save the day, throwing out the lyrics for us. After he had to join in a few times, realising we didn’t know the words at all, he declared: “You’re not Irish, you don’t even know the words to the songs.”

We could have broke his heart and tell him not everyone in Ireland is a Westlife fan, but we decided against.

Much to Louis Walsh’s chagrin, Westlife’s music hasn’t quite cracked the elusive North Korean market. It transpired that Mr Lee’s father worked in one of the government departments and was able to send his son to study abroad for one year, which I think was Nigeria.

It was during this year abroad that he became a fan of Westlife and has, evidently, carried that flame with him since.

So, to finish, I’ll leave this Westlife track here for Mr Lee. It kind of sums up how it feels flying with Air Koryo.

View all posts by Noel Byrne